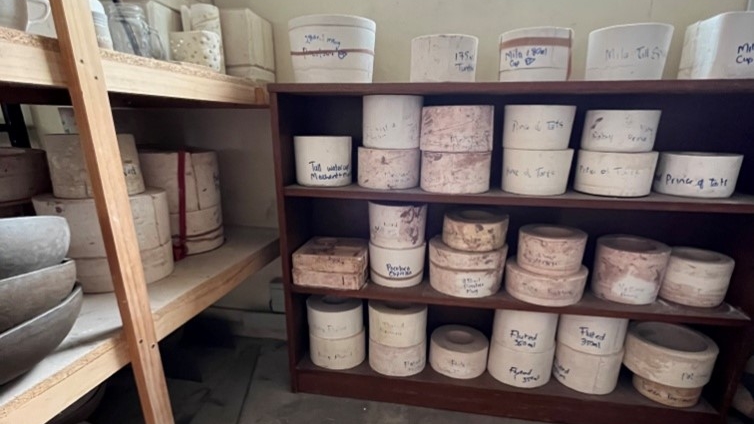 Learning How to make our own Ceramic Moulds

Ceramic mould making was a very daunting task that lay ahead of me when we decided to start making slip cast products; I had no previous experience or even the slightest clue how to do slip casting, let alone make my own mould for it. Instead of outsourcing the production of the moulds I decided to learn myself.

After watching numerous YouTube videos and reading many articles I got all of the necessary things and began. It was a simple mould to make, just a one part mould that involved pushing a wet clay cup with an easily removable shape into a bucket with freshly mixed plaster. Once the plaster was dry all I had to do was remove the clay cup and let it dry. It turned out extremely well and really boosted my confidence but shortly after that I had to learn how to make a 3 part mould as we were going to start making coffee cups with handles… what a different story. I had no idea how much 3D visualization would be needed to just figure out where to start. You need all 3 parts of the mould to come apart around the object while also fitting perfectly together, it also needs to have an open top to pour the slip in and enough of a plaster wall above the object to not let the slip wall be too thin. 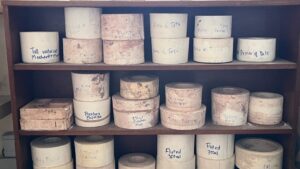 All of that is stressful enough without needing to know how much plaster to mix in the correct ratio for each part of the mould (which is a total guess every time). You also need to have something to make the mould in, which in my case was a plastic bucket. To start is simple enough, you mix enough plaster to pour into the bottom of the bucket to be the base of the mould, cool. Then it gets tricky, you have to mark out exactly half of the cup, working out where it would potentially get stuck and how best you would remove it if the other half was still in the mould. You also have to mark out half of the base and where you’ll place the cup, then take a spoon and make small holes in one side for the “keys” so that the whole mould doesn’t slide around. When that’s done you cover it in Vaseline so that the plaster walls won’t stick together.

Once that’s done you take clay and build a wall along the halfway line on the cup and basically cover the one side, keeping it as neat as possible (surprisingly difficult). Then place it on top of the base and build a wall of clay between the cup and the bucket, so that the plaster will only be covering one side of the cup and the base, also adding an extra lid of clay above the cup to create the hole for the slip to be poured through. This is all just the prep work, now you guess how much plaster to mix, hopefully not too little because what a rush to mix more before it starts setting. 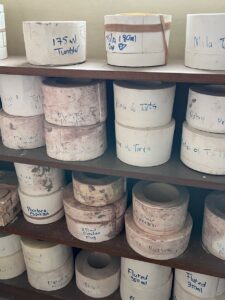 Now when that sides dry you take away the clay, work it off as best you can, add the keys and the Vaseline to everything and then pour the other side. Just when you think the worst is over you have to take it apart (if it comes apart), mine didn’t. After some prying it came apart, some pieces chipped off too but it was still good. You have to wait now for the plaster to dry before you can see if the mould works well and nothing sticks, which can take a week or so. My first attempt definitely didn’t work. I got the hang of it around the third try.
It is still a bit daunting when I have to make one for something with lots of weird angles and shapes but it’s a lot more fun now and I can get it done in less time and less mess. 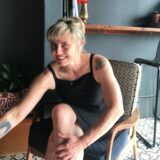 I am a woman who strives for perfection, a strong willed person, determined and passionate in all aspects of my life. At times pushing myself to extremes, always working at becoming a better version of myself through constant expansion. Someone who believes that supporting and bringing out the best in others can make the world a better place.